Home/Kratom Benefits, Kratom Knowledge, Kratom Uses/How Does Kratom Work? Exploring The Uses, Side Effects, and Where This Plant Comes From
Previous Next

In recent years, a lot of hype has emerged surrounding the herbal supplement referred to as kratom. You have probably seen the herb in dispensaries, smoke shops, vape shops, health food stores, gas stations, and online. Maybe your friends are also using it and singing its praises. However, you might wonder how does kratom work? We will take a close look at kratom in this article to discover its impact on the body.

When looking at how does kratom work, we must look at the substance as a whole and that means exploring it from beginning to end. You might wonder what is kratom? Well, kratom is an herb that is obtained from the foliate of a tropical evergreen tree referred to as the Mitragyna speciosa. The tree is a member of the coffee family. It grows naturally throughout much of Southeast Asia. The leaves contain compounds that have a slight psychotropic (mind-altering) impact on the user.

In the United States, kratom is legal and readily available either at brick and mortar establishments or online. You’ll sometimes see it being sold as a green powder in a packet that is frequently labeled as ‘not for human consumption.’ This is especially true in Canada where kratom is widely sold and it must always be labeled ‘not for human consumption’. Kratom is also marketed in capsule form and as an extract. On rare occasions, you might also see it as gum.

Kratom is often referred to under the following names:

Looking at the History 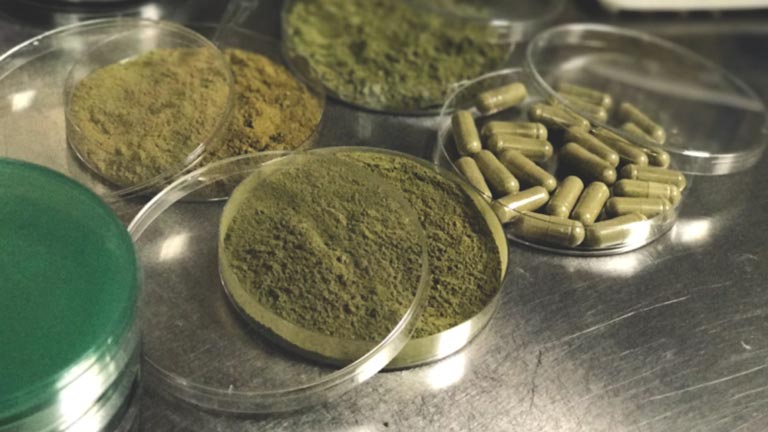 Kratom in the lab.

For centuries, kratom has been widely used throughout most of Southeast Asia. Without a doubt, the plant’s popularity is a direct result of its dose depending on pharmacologic effects.

Peter Houghton, a pharmacognosy’s who performed his Ph. D work with Shellard said, “The major interest was in Mitragyna speciosa, known as kratom because it was used as a substitute for opium or as a cure for opium addiction in (what was then called) Malaya and Thailand.” He went on to say that the pharmacy company Smith Kline French who later merged with GlaxoSmithKline were interested in developing Mitragynine as a potential pain killer that would replace morphine. It was found that its potency and effectiveness as an analgesic surpassed that of codeine. However, they performed toxicity tests and found that Mitragynine was toxic to beagle dogs, so they decided to end all research.

Phillips went on to say about the lack of Mitragynine for research, “We obviously wanted to become involved in biological activity, and that meant collaborating with pharmacologists who would say, ‘Send me 10 grams of what you’ve got,’ but we only had 10 milligrams, and all of those have large numbers of alkaloids”

Phillipson went on to isolate 15 alkaloids during his time with Shellard. “Eight of these (alkaloids) were not previously isolated from Mitragyna, and five of them were, in fact, novel alkaloids, and I was interested in the determination of their chemical structure,” he says.

How is the Herb Used?

Kratom can be taken in powder, pill, or extract form. In Southeast Asia, kratom leaves are often chewed or brewed into a tea. On rare occasions, kratom is smoked or taken in a food form. When consumed as a powder, most users opt to use a toss and wash method which includes placing the desired dose of powder directly in their mouth. They then take a drink of water and swallow it quickly. However, the gag reflex of many users is intense so filling their mouth with powder causes a coughing fit. In such circumstances, you should add kratom powder to a smoothie, tea, or coffee. You can also bypass powder completely and simply use capsules or extracts.

How Does the Herbal Supplement work Work? 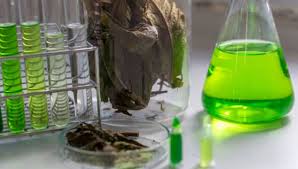 Learning how it works

After ingesting ther herb it causes a remarkably similar effect as a stimulant or an opioid depending on the dosage. The naturally occurring alkaloids found in the fibers of the foliage act in the body’s endocannabinoid system directly on the opioid receptors. The two main alkaloids found in the plant are Mitragynine and 7-α-hydroxymitragynine. The alkaloids might also help decrease the user’s perception of pain and ease their mood which proves beneficial with anxiety. Also, the alkaloids, when taken in low doses appear to stimulate the receptors which increases the feeling of energy, alertness, and sociability. ‘ The fact that the alkaloids of the herbal supplement interact so closely with the body’s opioid receptors and the endocannabinoid system has made researchers sit up and take notice. Many theorize that kratom might prove highly beneficial for individuals suffering from varying degrees of depression. Recently, scientists have started to conduct research on kratom and how it impacts a user’s mental health. In a 2017 study, it was found that people who use kratom in an effort to self-treat mental health problems showed a reduction in symptoms. This is especially true for the treatment of depression and anxiety.

In 2018, research showed that kratom did appear to enhance the mood of users suffering from depression. It not only enhanced their mood but also seemed to reduce their anxious feelings. The researchers even suggested kratom might prove a viable option as an opioid substitute for those suffering from opioid use disorder.

When learning how does kratom work, we must look at how kratom interacts with the body’s opioid receptors found in the brain. The amount of kratom taken will have an impact on how you feel. However, the herb titillates the opioid receptors to create the following reactions:

The study also showed that Mitragynine appears to work with other areas of the brain and end up causing a stimulant effect, especially in low doses. The user will feel more energized and ready to conquer the day. A moderate dose of spurs feelings of euphoria and happiness. Users feel social and friendly.

When exploring how does kratom work, we must also look at the potential side effects. Not everyone who uses kratom has a positive experience. Clearly, the alkaloids can also have unpleasant side effects for some users. Although, it should be noted that side effects are rare, especially if you take a low dose of the herb.

Oliver Grundmann, a toxicologist, and pharmacologist at the University of Florida said this about kratom side effects, “That was a very low incidence rate, overall, compared to many other drugs … even among those that are common prescription drugs. “I’ve found that these effects, especially, were not necessarily as dose-dependent as some of the other effects, like the analgesic effects. So I think that people that are taking it for the mood-elevating effects, the antidepressant effects, are not necessarily at as high of a risk of getting used to or dependent on kratom as those that are taking it for the analgesic effects or for treating opiate withdrawal symptoms.”

Possible side effects of kratom include:

Depending on the individual, they might experience greater feelings of anxiety or depression. One drawback about buying kratom is that you never know the purity level. Ideally, you should look for a brand that takes the time to run laboratory tests to confirm the purity of the kratom. Kratom needs to contain no harmful substances such as heavy metals, bacteria, fungi, or pesticides. Many leading kratom brands are stepping to the plate and doing the responsible thing by offering independent third-party testing for all their products.

To learn more about how does kratom work, please contact My Kratom Club.