In the United States, the National Institute on Drug Abuse reports that 128 people die every day as a result of opioid overdoses. The staggering statistics clearly illustrate the chronic use of opiates and the widespread dangers.

Whether prescription pain killers, synthetic opioids such as fentanyl, or hardcore drugs like heroin, the addictive characteristics have spurred a national crisis with an economic burden of 78.5 billion each year which includes the cost of additional treatment, lost wages, health care, and criminal justice cases. The grim situation and the bleak future are sending many looking for solutions which is why medical professionals and addicts are now looking closely at kratom vs. opiates. Can kratom help overcome opiate addiction?

Kratom is a natural solution

Kratom refers to an herb obtained from the tropical evergreen tree Mitragyna speciosa which grows naturally throughout most of southeastern Asia. Interestingly, the tree is classified in the same family as coffee beans.

For centuries local people have used the leaves and shoots produced by the tree for numerous health problems such as to ease aches and pains, as an opiate substitute, treat infections, and provide a quick energy boost. They will brew the plant fibers into a rich tea or chew on the leaves. When used at a low dose, kratom produces very stimulant-like qualities.  A greater amount creates an opiate-like reaction that is very sedative. The alkaloids Mitragynine and 7-hydroxymitragynine within the plant’s fibers are the active ingredients.

When looking at kratom vs. opiates, we must take a deep look at the opioid crisis in the United States. Without a doubt, the opioid addiction process launched in the 1990s. The medical community started to freely prescribe opioid pain relievers a far greater rate than previously. It is believed that the additional prescriptions are what led to the current crisis because of the highly addictive nature of prescription drugs.

In 2017, over 47,000 Americans died from opioid overdoses. Reports showed that 1.7 million people were addicted either to prescription pain relievers or street drugs like heroin. To kick the habit, many have turned to rehabilitation centers to overcome withdrawals. However, such treatment facilities are expensive and often not covered by insurance or the person is simply uninsured. In such situations, some people have decided to try to clean up without medical help. Addicts often use kratom to cope with the often-extreme opiate withdrawal symptoms.

How Does Kratom Help with Opiate Addiction?

WebMD reports how Eric Mayhew J. used kratom to kick is decade opioid addiction. After sustaining a knee injury, Mayhew found himself addicted to opioids. He opted not to undergo inhouse treatment but decided to try to go it ‘solo’ with a detox program all his own. Sadly, he struggled for two years with no success in overcoming his addiction. However, he then decided to try kratom.

This is what Mayhew said about the herb, “ What Kratom does is kills your brain’s desire when you feel addicted to opiates and you want opiates. It dulls your pain and you start to get your wits back again.”

To stay clean, he now takes to two to four kratom capsules per day. He has no side effects from the herb and believes that it helps bolster his willpower substantially,  “You have to want things to work. Nothing works unless you understand that, “ states Mayhew. Luckily since turning to kratom, he has not relapsed back with opiates.

Gaining treatment for opiate addiction is difficult. Most rehabs have long waitlists and are very expensive. Sadly, only about 21.5 percent of addicts get treatment to help them battle their addictions. However, for some people committed to getting clean, kratom becomes a viable option for a do-it-yourself withdrawal plan. Interestingly, up to 70 percent of kratom users have turned to the herb to gain control over their opioid addiction. When looking at kratom vs. opiates, kratom clearly comes out on top as a benefit instead of a hindrance for such individuals. Kratom is widely available in capsules, powder, and tea forms.

In recent years, kratom has been used as a self-treatment option for a variety of health problems like pain, withdrawal, and mood disorders which are all made worse by opioid use. Luckily, the herb has few side effects. Some users might experience nausea or constipation but those are infrequent and usually only happen with high doses.

WebMD looked at a study carried out in 2008 by Edward W. Boyer MD, the director of academic development in the Department of Emergency Medicine at Brigham and Women’s Hospital in Boston, and found that a 43-year old man used kratom to cope with pain and overcome opioid abuse. Although he spent $15,000 per year for kratom tea, he did report that it helped him with his opioid withdrawal and curbed his pain without drowsiness or other unpleasant side effects.

“I think the cool thing about it is this guy went from injection drug use to nothing, and all he had was a runny nose. It’s similar to something like methadone or any other opioid, but what is different is withdrawal from those substances is far more involved.”

After studying mice and kratom, he states, “It is probably addictive, but its addictive equivalent is something like coffee, which isn’t surprising because the leaf is in the coffee family. We firmly believe that it will be very good for treating opioid withdrawal and maybe a possible solution to the opioid epidemic we are facing as a country.”

Kratom remains widely popular as a self-treatment aid in detoxing from opioids. 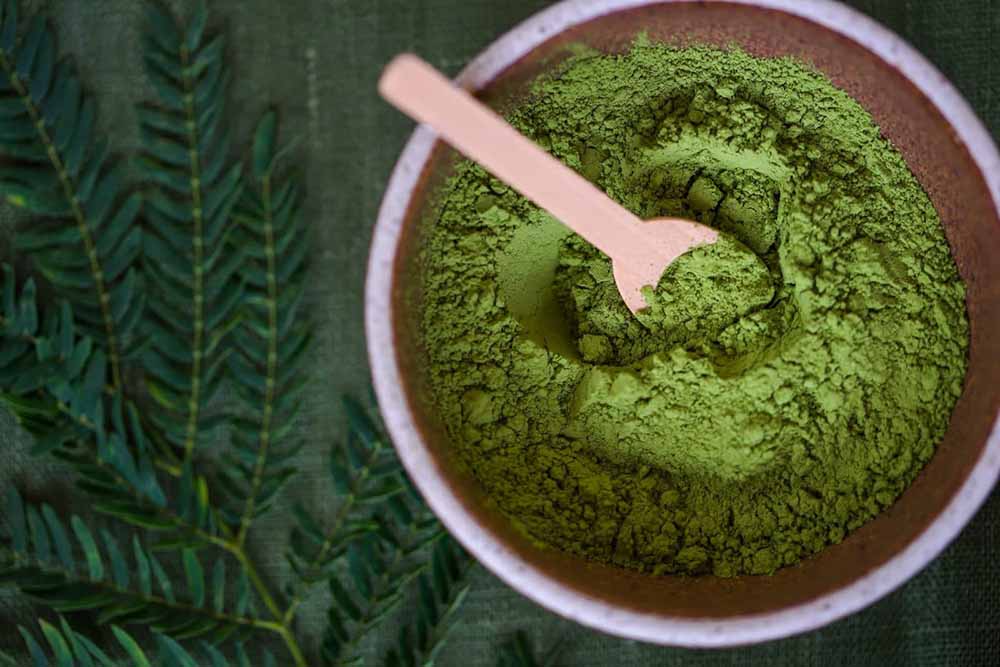 Kratom has been used for centuries.

Opioids remain the number one choice for pain relief. Kratom is not without risks and side effects such as addiction. Another problem is respiratory depression such as shallow breathing or fatal overdose which occurs when breathing stops.

Andrew Kruegel, PhD, an associate research scientist in the department of chemistry at Columbia University in New York, states on WebMD , “If you could come up with a drug that either got rid of the addiction liability or got rid of the respiratory depression… you would have a serious leg up on what’s out there right now.” He considers kratom an atypical opioid that does interact differently in the brain.

The alkaloids in kratom, Mitragynine and 7-hydroxymitragynine, have a similar impact on the brain but without causing respiratory depression. They are considered partial agonist. According to Kruegel means, “They can activate the brain in such a way that they provide pain relief without, or at least with less, respiratory depression. In fact, they don’t turn on the receptor as fully as you would with morphine or fentanyl, for example. You only get a partial response. That is also protective in terms of respiratory depression side effects.”

Johns Hopkins Medicine carried out a survey of 2700 plus kratom users and looked at the opioid receptor-mediated effects to see if they were less harmful than prescription opioids. When comparing kratom vs. opiates, they found that kratom provided a far lower rate of harm than standard prescription opioids used for pain, addiction, anxiety, and depression.

The researchers at Johns Hopkins Medicine stated, “Although our findings show kratom to be relatively safe according to these self-reports, unregulated medicinal supplements raise concerns with respect to contamination or higher doses of the active chemicals, which could increase negative side effects and harmful responses. This is why we advocate for the FDA to regulate kratom, which would require testing for impurities and maintaining safe levels of the active chemicals.”

The Legitimacy of Kratom vs. Opiates

In an interview, Dr. Christopher McCurdy of the University of Florida College of Pharmacy states, “I definitely believe there is legitimacy to using kratom to self-treat an opiate addiction. I believe it from the standpoint of the material we know is pure and unadulterated and good. I just don’t know if all products available are consistently pure and good.”

He goes on to state that the lack of withdrawals is a benefit.  “That it helps them stop their cravings for going back to opioids and helps them with their mood.

“It is probably addictive, but its addictive equivalent is something like coffee, which isn’t surprising because the leaf is in the coffee family,”

McCurdy says. “We firmly believe that it will be very good for treating opioid withdrawal and maybe a possible solution to the opioid epidemic we are facing as a country. You don’t know what you are getting, and I think that is the scary thing about going into self-treatment. On the flip side, I can tell you I get at least one email a week from someone on prescription opioids or heroin that states they have gotten off those drugs by using kratom.”

If you would like to learn more about kratom vs. opiates, please contact My Kratom Club today. We carry of a full line of many of the leading kratom brands and strains.