Kratom goes by many names — Thang, Kakuam, Thom, Ketum, and Biak — but the scientific term is Mitragyna Speciosa. It’s a tropical deciduous and evergreen tree within the coffee (Rubiaceae) family grown primarily in Thailand, Malaysia, Indonesia, Papua New Guinea, and Myanmar. The use of this herb dates back to at least the nineteenth century when it was reported to have been used by natives for ceremonial and medicinal purposes in the tropical regions of Africa and Southeast Asia.

Ancient Use of Kratom

However, there is reason to believe that Kratom was used in ancient times as well when farmworkers would chew on its leaves, either dried or fresh, to boost their energy levels and get through a full day of working in the field. These people were traditionally referred to as Kratom eaters who were known to consume the plant around 3 to 10 times a day.

Aside from consumption, people have also used Kratom to treat their addictions — morphine, opium, and other psychoactive drugs — and heal wounds by placing the leaves over the injured areas of the body.

The Science Behind the Herb 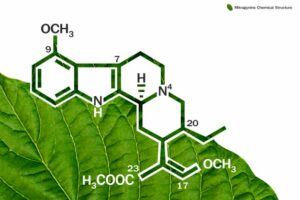 All about the Alkaloids

Kratom is known to have over 40 different alkaloids but the two that are primarily associated with the herb are Mitragynine and 7-OH Mitragynine. These are responsible for the herb’s characteristic properties.

Alkaloids are plant-based organic compounds that contain nitrogen. They exhibit a diverse range of physiological effects on humans and animals by interacting with the brain’s receptors.

In the 1970s, GSK’s predecessor analyzed the medicinal potential of Kratom.

Comparing the effects of the pure Mitragynine alkaloid with a crude extract of the herb. It was found that the alkaloid itself did not suffice as an analgesic and had no place in medicine.

It was believed that Mitragynine was the primary active ingredient in Kratom because its presence outweighed that of other alkaloids in the herb. That was until 2002 when a group of Japanese researchers discovered the plant’s true active component; 7-OH Mitragynine. Despite being present in trace amounts in Kratom, this alkaloid was responsible for a majority of the herb’s pain-fighting potential.

Mitragynine typically makes up roughly 1 to 2% of the dry leaf mass while 7-OH Mitragynine is present in much lower concentrations — approximately under 0.05%.

7-OH Mitragynine is 13 times more pain-relieving than morphine and 46 times more potent than Mitragynine. However, its concentration in Kratom is on the safe side of consumption.

The effects of these alkaloids aren’t just limited to pain relief; Kratom users take the herb to help with symptoms of anxiety, depression, fatigue, loss of focus, insomnia, and even lowered libido.

How Dosage Alters the Effects of Kratom

When consumed in low doses, Kratom functions primarily as a stimulant.

It delivers a boost of natural energy. However, in higher dosages, it functions as a sedative by triggering the narcotic receptors within the brain. But does Kratom get you high? A lot of people believe it has to do with the adulteration of the herb with narcotics like codeine, but it’s also true if you consume it in larger doses than recommended.

The Different Strains of Kratom 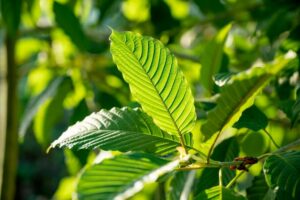 Cultivating the herb in a certain climate takes effect on the alkaloid content of the leaves, creating different strains for unique purposes. By exploring the vast Kratom variety on the market, you’ll get a sense of what the herb is really about.

These strains are further differentiated by the vein color; Red, Green, and White. The colors indicate the plant’s maturity level prior to harvesting, with white being the youngest, red the most mature, and green midway.

Whites are associated with stimulating properties, reds are more likened to sedation and pain relief, while green veins offer a good mix of both with lowered potency levels. Let’s talk about some popular Kratom strains out there:

Originating from the Island of Sumatra in Indonesia, this Kratom strain isn’t as strong as the others.

However, it is known to last long. Red Sumatra works exceptionally well to ease stress and tension. Its white vein enhances your focus for a whole day. Green Sumatra is the least potent, offering balanced analgesic and euphoric effects — ideal for beginners.

Indo Kratom is grown in the forests of Indonesia where the climate is just right. Green Indo is reliably potent, delivering well-rounded and balanced effects. It works great as a substitute for your morning coffee. White Indo is a good energy booster while delivering mild relaxation. Red Indo exhibits mild sedating and pain-relieving properties.

Bali is a very popular Kratom strain that comes from the Island of Borneo, not Bali. It’s been deemed the most “opioid-like” compared to other strains because of its powerful sedating and analgesic properties. It’s also known to help ease symptoms of anxiety and depression.

You can discover your Bali vein of choice after exploring the different Bali strains on My Kratom Club!

Moving on to Malaysian strains, Malay Kratom is viewed as stimulating but not too powerful when it comes to easing anxiety and pain relief. Malay is yet another Kratom strain that delivers long-lasting effects on the body, and users often combine it with others to bring different effects into one blend. Because it’s mild, mixing it with other potent white or green veins can subside the overstimulating effects.

Like Bali, this strain is also grown on the Island of Borneo but it’s believed to be stronger than the former. Borneo is known to cause euphoric sensations throughout all its blends. Green and White Borneo work as great stimulants while Red can help you unwind after a long, hard day.

In Thai, Maeng Da translates to Pimp Grade, attesting to it being the most potent strain available on the Kratom market. It originates from Thailand and works as a sensational energy booster. People often use it in place of their morning cup of coffee because it can help them get the jumpstart they need without the jitteriness. Maeng Da delivers some intense effects, so it’s generally not recommended for beginners. 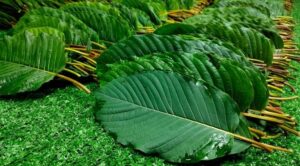 Kratom has been marketed in unique ways to suit the ever-growing needs of the general population. Here are the many forms in which you’ll find Kratom for sale:

Powdered Kratom has been around the longest. The leaves of the herb are harvested, cleaned, and dried out. These dried leaves are then crushed and processed into a fine powder that can be consumed in many different ways. You can add it to your morning smoothie and enjoy it on the go! But many people mind the earthy aroma and the inconvenience of weighing out doses.

You can make a hot, soothing cup of Kratom tea to help you relax after a tough day. There are many ways to brew yourself a cup — you could stick to pure Kratom tea by making tea bags with crushed leaves or using the powder OR you could use a tea base by combining it with your favorite herbal tea. If you want more, here’s the complete guide to preparing Kratom tea.

Kratom capsules are made by sealing powdered forms of Kratom into a gelatin shell while tablets incorporate binding agents to keep the powder intact. Capsules are preferred to tablets because they have virtually no taste and keep the content pure. However, both of these take some time to act in the body.

A popular, fast-acting way to consume Kratom is in its liquid forms — extracts, shots, and tinctures. How are these three different?

A liquid kratom extract is created by boiling the leaves to heighten their alkaloid content.

Tinctures are made with alcohol like ethanol to enhance its alkaloids. You’ll find these in dropper bottles.

Shots are made either the same as tinctures or extracts while also incorporating extracts of different strains and energy-boosting ingredients like caffeine. That’s why they’re primarily marketed as single-serve energy drinks.

You might not expect Kratom to come as candy, but it does. Kratom gummies have become very popular as they pack delicious flavors and tend to act quickly in the body. You can find at least 12 reasons to buy Kratom gummies over other forms!

As with other forms of herbal medicine, Kratom comes with a few safety guidelines to follow. First and foremost, you must be of legal age to consume any Kratom product. The dosage suited to your body depends on your age, health condition, gender, and tolerance level. However, it’s recommended to take no more than 2 grams on your first dose. Anything over 3 grams is considered a moderate dose while exceeding 7 grams is only recommended for experienced users who know what they’re doing. You can spot 8 Kratom overdose symptoms if you feel like you’ve accidentally taken more than you should.

The world of Kratom is very vast; there are a lot of things you should know before you decide to become a part of the community. You can find everything you need to know before buying Kratom — whether online or from local stores near you — at My Kratom Club!